It's my pleasure this week to interview Michael Halcomb. Not to be confused with the several Michael Holcombs out there! Halcomb. Anyway, I have had some personal connection with Michael, taking a few courses through the CKI program which, given how many other Ancient Greek speakers I run into on the streets of Ulaanbaatar, has been a real blessing. In this field, nothing is quite like real-time in-language interaction. Anyway, I think Michael's doing great work, and so let's hear from him:

First of all Seumas, let me say “Thanks!” for inviting me to share on your site by way of this short interview/questionnaire. I’ve enjoyed reading your blog as the opportunities to do have arisen and am glad there are folks like yourself writing about language, language teaching, and language learning. But to get to your question, I have four degrees in Biblical Studies. I earned a B.S. with a double-major (Bible, and Youth & Family Ministries) + a minor (Homiletics) from Kentucky Christian University and then went on to do my M.Div. at Lexington Theological Seminary. After that I did an M.A in Biblical Studies at Asbury Theological Seminary and after taking a year off, went back to Asbury and finished a Ph.D. in Biblical Studies (New Testament focus). In addition to that I've done some continuing education along the way in ancient Greek. 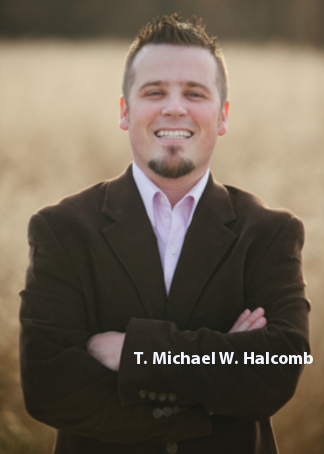 2. How did you first learn Greek?

When I first started learning Greek it was something that I really came to despise. My first exposure to it was via a traditional online class. Basically we just logged into a Moodle-like forum, uploaded an assignment, commented on a thread, and logged off. Essentially, I was wrestling through teaching myself Greek by way of using a grammar book. There were no audio lectures, no video lectures, no live online meetings, no live in-person meetings, etc.. It was just me and the book, and despite having studied some French and Spanish in high school many years earlier, this experience and this type of approach was completely foreign to me (in multiple ways). All that set me on a path that kept me in a constant wrestling match with Greek. One thing I knew about myself was that this just wasn't working for me like I wanted it to.

The result was that I eventually started creating my own resources to help “get” the language. I created my own notes and dictionaries, flash games, websites, interactive quizzes, audio recordings, etc.. I was attempting to fire on all cylinders and have my interaction with the language be more holistic. This helped me tremendously as I went on to take exegesis, research, reading, and language courses across the span of my academic career.

3. What made you shift to a communicative methodology?

I mentioned just above that in my journey of language learning I had been creating all sorts of resources for myself. This was not just for Greek, however, because I eventually had to take exams for German, French, Hebrew, and Aramaic. In studying those languages and preparing for quizzes, exams, and classes, I found that two things were especially helpful for me personally in engaging and retaining the vocabulary, etc: 1) Creating audio recordings; and 2) Writing in the language. To this day, those two elements—speaking and writing—are what I find to be key in the language learning process.

Eventually, I came to learn that others were doing similar things, that is, making recordings, writing in the language, etc.. In fact, I realized that folks had been doing this for many many years. And so, when I ran into others online who were engaging in similar practices and realized that a small community existed, I was incredibly relieved. This seemed to not only affirm my struggle with the language but also my desire to move in what many today would consider “unorthodox” or “non-traditional” ways of teaching (which may actually be kind of backwards, historically speaking). So, I think that one of the major things that caused me to go ahead and make the whole shift into teaching via a communicative approach was the realization that there were others, a type of small community, who were trying to do it too. And that’s precisely the DNA of the Conversational Koine Institute—it’s a rapidly growing community consisting of folks who want a more holistic approach to language learning and language teaching.

4. How did you first equip yourself to use a communicative method? What were some of the difficulties?

As I noted previously, two of the things I have done most, in addition to reading, is making audio recordings and writing in the target language. Apart from what education I've had and the skills I gained there, I started getting involved in small pockets of communities where folks were trying to speak. What I noticed happening, however, was a sort of antagonistic pendulum swing. It was not only as if the so-called “traditional” (i.e. grammar-translation) approach was inefficient, but that it was somehow evil and wretched. That sort of attitude and discussion was and continues to be a constant turn-off to me; in my opinion, it’s just not all that helpful or needed. And that has led many to just neglect and even discard explicit grammar teaching altogether. To me, that’s even worse! In my view, then, that needed to be remedied. And that’s why I launched the Conversational Koine Institute. Here, students will be exposed to classes taught in the target language in fun, conversational ways, but also get needed discussions of grammar, grammatical terminology, syntax, etc., also in the target language. This equips students with the ability to navigate the language in the language as well as to talk about and discuss the language in the language (I’m thinking “meta-language” here). So, one of the first things I started doing was researching ancient grammar and grammar terms. Since nothing like that really existed and students kept requesting it, I turned it into a book and had it published. Getting that settled was one of the initial hurdles I had to jump over. Another hurdle was getting the word out about CKI. Fortunately, CKI is growing quickly today and I’m grateful for that; I’m grateful to see a portion of the movement spring forth from CKI!

5. What courses or materials do you currently offer?

At present the Conversational Koine Institute offers a number of classes, workshops, and materials. With regard to the classes we have a core curriculum that consists of Greek 1-5. In addition to this there are Greek Readings classes and various types of immersion events and workshops year-round. We now also have Hebrew 1 and Latin 1 courses. CKI is always innovating and new courses in Greek, Hebrew, and Latin will be offered continually. CKI also has a Greek Certificate Program that offers Continuing Education Units/Credits in conjunction with Asbury Theological Seminary. We have also formed a relationship with an undergraduate institution in Canada.

As far as materials, CKI offers a lot. In addition to live classes, I have created a number of helpful audio, video, and print resources. You can find some free ones here (http://www.conversationalkoine.com/2013/02/sneak-peeks-downloadables-etc.html). There's a list of print resources (some of which have additional audio companion files) with links at the end of this interview.

6. What sort of outcomes do your students generally finish with? Where are they ‘at’ when they’ve completed a course of study with you?

This is actually a really tough question. It is tough because every single student is different. Students have different work ethics, attitudes, focus levels, backgrounds in (the) language, interest levels, amounts of time to put into the language, etc.. But this, of course, is not something unique to CKI students; rather, this is pretty much just the case with students taking any subject anywhere. Nevertheless, I do try to shoot for several outcomes for students who can make it all the way through Greek 5. So, let me speak with a view to going all the way through as opposed to just completing a single class. In addition to being able to listen, respond, and speak, one of my biggest goals is to equip students to be able to read Greek texts like the New Testament with a high level of comfort. I would hope that the students who can make it through these 5 core classes would be able to take an intermediate level seminary class and be farther along than most of the other students in there, and eager and ready to move on to an advanced class. They should be farther along because they will have a broader understanding of the language and the way it works as well as a much more expansive vocabulary. At CKI, when students make it all the way through the 5 courses, they are permitted to take the Greek Readings courses that are offered each semester (everyone else must be enrolled in another Greek class to take those). Of course, I cannot make any promises as to where an individual student may be. But if they come and really apply themselves and stick with it, my hope is that they’d be, as I said before, comfortably at home within the Greek New Testament, and well-equipped to take an intermediate level seminary class and eager and ready to move on to advanced classes.

With that said, I’d love to invite any of your readers to come join us at CKI. Early Fall classes begin Tues. Aug. 12th for Greek and Sat. Aug. 16th for Hebrew and Latin. Classes are already filling up quick. If folks are interested, they can register on the site here (http://www.conversationalkoine.com/p/contact.html).

Thanks again for hosting this conversation, Seumas, I hope readers find it edifying and helpful. Keep up the good work!

You can read the first interview in this series, with Sebastian Carnazzo, here.

Good job, Michael Halcolm. Your drive has taken the methods to new heights. I agree with you that grammatical instruction has a real benefit and shouldn't be vilified.